This study aims to support the development of a precision medicine intended to treat patients with genetic forms of Parkinson’s disease. Up to 15% of cases of Parkinson’s disease have an underlying genetic cause, yet many patients have never had genetic testing. This research study will be very important in supporting the future development of a new oral precision medicine treatment for one of the most common genetic forms of Parkinson’s, aimed at slowing the progression of the disease.

About this research program

This study aims to support the development of a targeted precision medicine intended to treat patients with a genetic form of Parkinson’s disease by providing participants with free genetic testing. Up to 15% of cases of Parkinson’s disease have an underlying genetic cause, yet many patients have never had genetic testing as there is often no family history of the disease.

In instances of Parkinson’s where the disease is caused by genetics, one of the most common reasons for this is a mutation in a gene called LRRK2 (Pronounced “Lark-two”). The genetic mutation can occur in anyone with Parkinson’s and comprises up to 30% of all Parkinson’s cases in people of Ashkenazi Jewish or North African Arabic ancestry. Additionally, patients with young onset Parkinson’s or a family history of the disease are more likely to have this mutation. ESCAPE Bio (ESCAPE) is investigating this mutation in order to help develop a new treatment specifically for people with Parkinson’s who have a form of this LRRK2 genetic mutation which is called G2019S.

This research study will be very important in supporting the future development of a new oral medicine treatment for one of the most common genetic forms of Parkinson’s, aimed at slowing the progression of the disease.

Why should I participate? 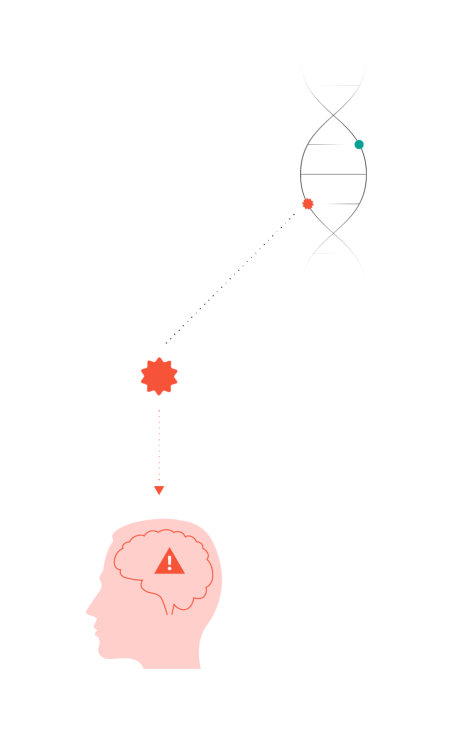 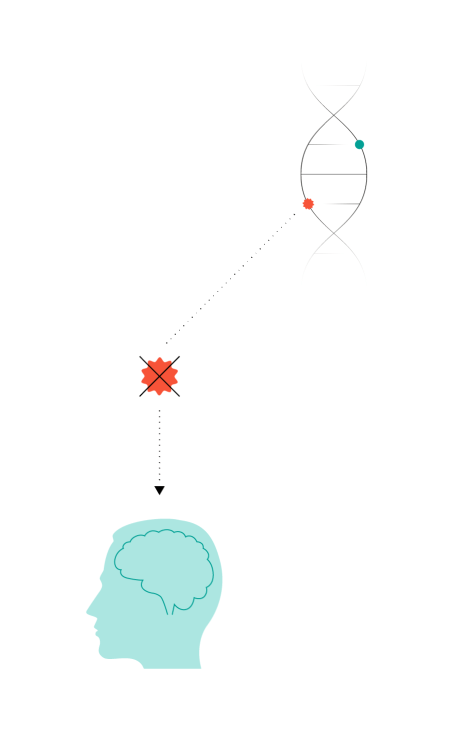 ESCAPE is developing an investigational therapy that only blocks the overactive LRRK2. The therapy is intended to be taken by mouth in pill or capsule form.

Genetic testing, the process of sequencing a person’s DNA via a saliva sample, is a test which allows researchers to identify variation in genes specific to that individual. Some genetic variants have the potential to increase the likelihood of a person developing a particular disease and can also leave clues about which treatment solution would be the most effective.

Up to 15% of cases of Parkinson’s disease have an underlying genetic cause, yet most patients have never had genetic testing. Collecting genetic data on Parkinson’s is vital for helping researchers develop new treatments and personalized medicines.

Anyone with a diagnosis of Parkinson’s disease, aged over 18 and based in the US can see if they are eligible to participate.

No, it’s completely free to take part in this program - if you qualify you will receive a free DNA test and be able to participate in research from home.

No, your data is yours and will never be passed to third parties such as insurance companies or employers. Your test results will only be sent to you and your healthcare professional.

Not currently, however, taking part in genetic research programs like this will help researchers identify the next steps for developing new treatment options. By increasing understanding of genetic Parkinson’s disease, we hope this program will help accelerate the future of personalized medicine in Parkinson’s.

If you are not eligible to take part in this round of the program you are free to leave your contact details and we will contact you if you become eligible at a later stage. You may also be able to get genetic testing through various healthcare providers.

Why is this program being done?

This program will try to identify people with LRRK2 Parkinson’s disease who have a pathogenic mutation in the LRRK2 gene caused by the most common mutation (G2019S) by making free genetic testing available to them. The program will also try to gather additional information about the proportion of Parkinson’s disease patients who have this specific genetic form of the disease and aims to educate healthcare providers and patients about why it is important to have genetic testing if a patient has a Parkinson’s diagnosis.

Who is eligible for this program?

People with a diagnosis of Parkinson’s disease who are receiving a normal standard of care:

What is LRRK2 Parkinson's disease?

LRRK2 (commonly pronounced "Lark-two") is a critical protein that regulates cellular function and is produced from the LRRK2 gene. G2019S LRRK2 Parkinson’s disease is believed to be caused by a mutation in the LRRK2 gene leading to the production of overactive LRRK2. Most people with a diagnosis of Parkinson's disease have not been tested for LRRK2 mutations, however it is estimated that between 3% -30% of patients have this underlying mutation. ESCAPE Bio is developing a G2019S LRRK2 targeted treatment.

What are the benefits of genetic testing?

ESCAPE is developing a new therapy for patients with Parkinson's disease caused by a mutation in the LRRK2 gene. It is hoped that this therapy may be able to stop or slow the progression of the disease. Since most people with Parkinson’s disease have never been tested for LRRK2 mutations, ESCAPE is providing free genetic testing via mail which is an at-home saliva test. If a patient is found to have a mutation in the LRRK2 gene they will be invited to take part in certain clinical studies for patients with Parkinson's disease and this specific gene mutation.

How do LRRK2 gene mutations cause Parkinson’s disease? 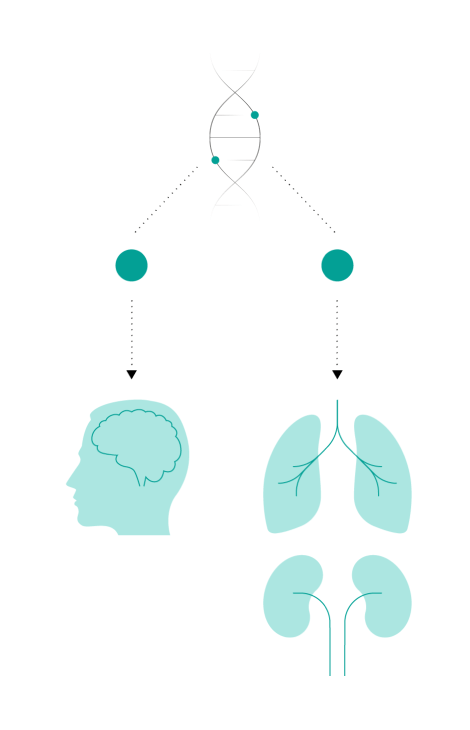 All humans have two copies of the LRRK2 gene which produce LRRK2 protein. In healthy people both copies of the gene are normal and therefore produce normal LRRK2 which regulates normal cellular biology. 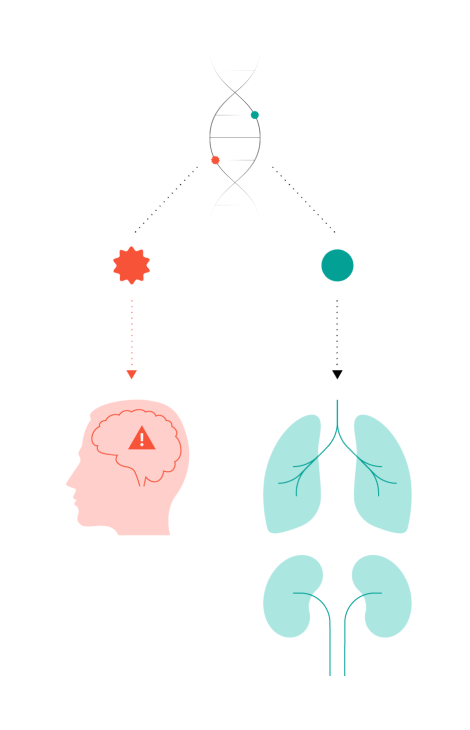 Patients with LRRK2 Parkinson’s disease usually have one normal gene and one mutated gene. This means that patients produce both healthy LRRK2 protein and an overactive form of LRRK2 protein. The overactive LRRK2 is believed to drive neurodegeneration, causing Parkinson’s disease, while the healthy LRRK2 continues to provide normal regulation to cells in other organs such as the lungs and kidneys. 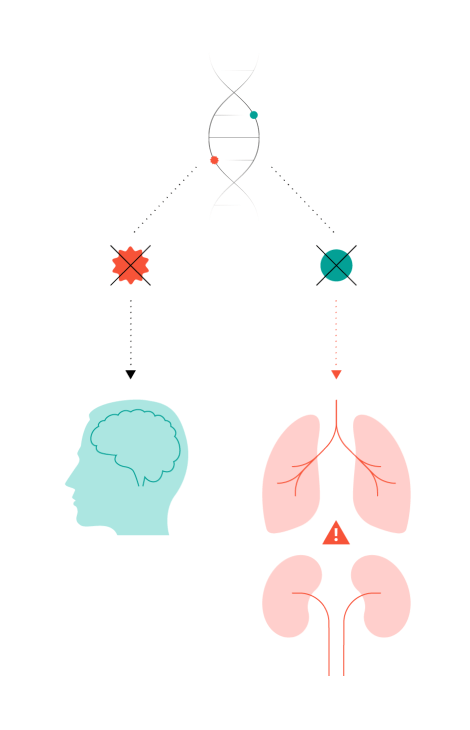 In order to slow or stop the disease, ESCAPE Bio believes that overactive LRRK2 needs to be nearly fully inhibited. However, if healthy LRRK2 is also inhibited by the same amount then it may not be able to regulate cellular function in other organs, thereby driving histopathological changes in the lung and kidney, which are hard to detect and may be associated with irreversible pathology if they go unchecked. 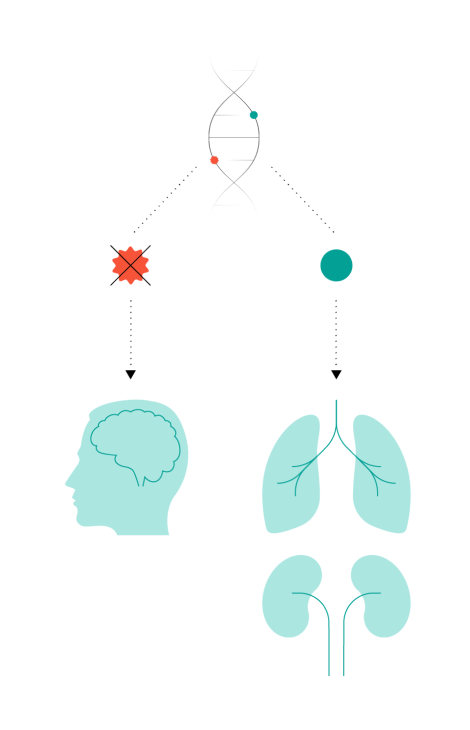 To overcome this, ESCAPE Bio is developing an investigational therapy aimed to nearly completely block mutant LRRK2 without significantly blocking healthy LRRK2. ESCAPE believes that this precision approach gives the best chance of slowing neurodegeneration in Parkinson’s disease and ultimately preventing disease in gene carriers, while avoiding side effects in the lung and kidney. The therapy is intended to be taken by mouth in pill or capsule form.

Other LRRK2 inhibitors are non-specific and inhibit both the healthy and overactive LRRK2 proteins by the same amount. Since all LRRK2 is inhibited by the same amount, the level of inhibition of mutant protein has to be at a low enough level to avoid side effects in the lung and kidney caused by inhibition of healthy protein. While this is an important step forward for many forms of Parkinson’s, we believe patients with LRRK2 Parkinson’s will benefit from a drug that significantly inhibits the disease causing (overactive) protein while avoiding significant inhibition of the healthy protein.

The first step for patients who would like to take part is to sign up to the program by clicking the “sign up” link and entering their email. Patients will then be asked a few basic questions about their condition, symptoms, and family history. Eligible patients will go through the informed consent process and will then be presented with the option to order an at-home DNA kit. Once received, they will then register the test kit, complete the test, and return their kit in the pre-paid mailing envelope. Once a patient's DNA has been sequenced and analyzed, they will receive a report with the results of the genetic testing and will then be informed if they qualify for the next stage of the program.

To speed up recruitment for a natural history program we are first focusing on patients who have a higher likelihood of testing positive for the mutated gene from the free genetic testing program. If a patient does not meet the criteria now, we will offer to contact them again should we open up the screening program to a wider population of Parkinson’s patients.

Like many sites, we use cookies and analytics to improve your experience. Find out more here, or to continue with the recommended settings, dismiss this message.